C+R’s sunrise elopement in the Dolomites was one for the books. The pair held not only a memorable vow exchange shared in the early morning hours, but later, a legal elopement ceremony in Cortina d’Ampezzo with a few close family members. We hiked, took cable cars, and adventured all over the craggy mountains.

Sunrise Elopement in the Dolomites

C+R’s day started out early - we met at 5:15 am to be exact, just twenty minutes down the road from our final destination. The parking lot was filled with thick fog. Our group was hoping for clear skies though, which many of the webcams showed from higher up. We chose to meet a short distance before the trailhead since cell service was known to be spotty at our final destination.

After greeting each other good morning, it was time to keep driving. Up and up our cars switch backed along a steep road. Soon, we were above the clouds and mountains rose up in every direction. The sky was still deep blue, and the sun wouldn’t be up for another hour.

By the time we reached the parking lot, there was enough light to see without headlamps. Layers of purple and pink stretched across the clear sky.

We packed our bags, checked everyone had their gear, and then we hit the trail! Deep orange bathed the peaks in the early morning alpenglow. We couldn’t help but stop to soak up the stunning view. C+R’s elopement location offers one of my favorite panoramas in the Dolomites, and this morning was truly spectacular.

After reaching a high point on the trail, we decided to begin scoping out the perfect ceremony location. It didn’t take long to settle on an epic backdrop. The sun was just beginning to peek over the mountains, so C+R began their vow exchange. As they committed themselves to each other, the plateau filled with warm light. It felt otherworldly. There is nothing more special than connecting to your partner in a landscape as grand as this one.

Post-Ceremony, we had some time to explore the wide plateau, take photos, and bask in the sunshine. Everywhere we looked, epic views greeted us. Eventually, it was time to say goodbye to the view, though. C+R were also holding a legal ceremony in Cortina d’Ampezzo with a few close family members. It was time to drive back into town.

In Cortina, there was a little bit of time to kill before taking a cable car up the mountain, where C+R would meet their families. We had originally planned to stop at a cute bakery, but because we were just a touch tight on time, the two settled on snacks and coffee from the ice skating rink right next door. C+R joked it felt true to them.

Before we knew it, it was time to take the cable car up to the mountain hut hosting the legal ceremony. Italy is one of the easiest countries to legally elope to in the Alps, and a number of mountain huts are designated wedding locations. Securing a venue in August (peak season), was no small feat for C+R; but eventually, the perfect place pulled through.

The mountain hut had the second floor reserved just for us, and C had hired a florist to decorate for the event. Beautiful florals adorned the seats and table. The first portion of the ceremony took place in Italian, with an interpreter to assist with translation. C specifically loved the idea of eloping to Italy because she actually speaks Italian! It was neat to see her use her skills confidently throughout the wedding day. For the rest of the party, the interpreter was great to have on hand, though. For any legal ceremony, where not all parties speak Italian fluently, an interpreter is required. After the brief legal ceremony, R’s brother led a symbolic portion that included ringing an Irish bell. It was really sweet, and a cool tradition I wasn’t familiar with.

After the ceremony with family concluded, everyone gathered together for photos and a toast. Then, it was time for lunch. A small outdoor seating area was partitioned off for C+R to eat with their family. This area was also decorated by the florist. Everyone ate under the shade of the umbrella until they had their fill of Italian food.

Mountain Top Adventure in the Dolomites

Once everyone was fed, C+R decided to take a series of cable cars further up the mountain. Naturally, we wanted see the view too. It was such a beautiful afternoon, and it was impossible to resist the invitation to join them. All of us road higher and higher up the mountain, until eventually, there was nothing left but sky. We were on top of the world!

It was funny to reach the top, with most of the group donned in wedding attire. Climbers were passing us and offering their congratulations. Two climbers who stood on the summit even tried to make a heart with their arms, and then excitedly greeted C+R  as they walked to the cable car. It was a funny exchange, and one of the things that make getting married in the alps so fun. Everyone is always so thrilled (and shocked) to see people getting married in the mountains.

We walked a short distance from the cable car to get a better view and take a few epic portraits. Everyone was on a high from the day and all the fun had along the way.

Soon the day turned to late afternoon, and it was time to descend the mountain. We rode down, still in disbelief at how freaking fun it had all been. Saying goodbye to newfound friends is hard, but we know we’ll be adventuring with these two again. 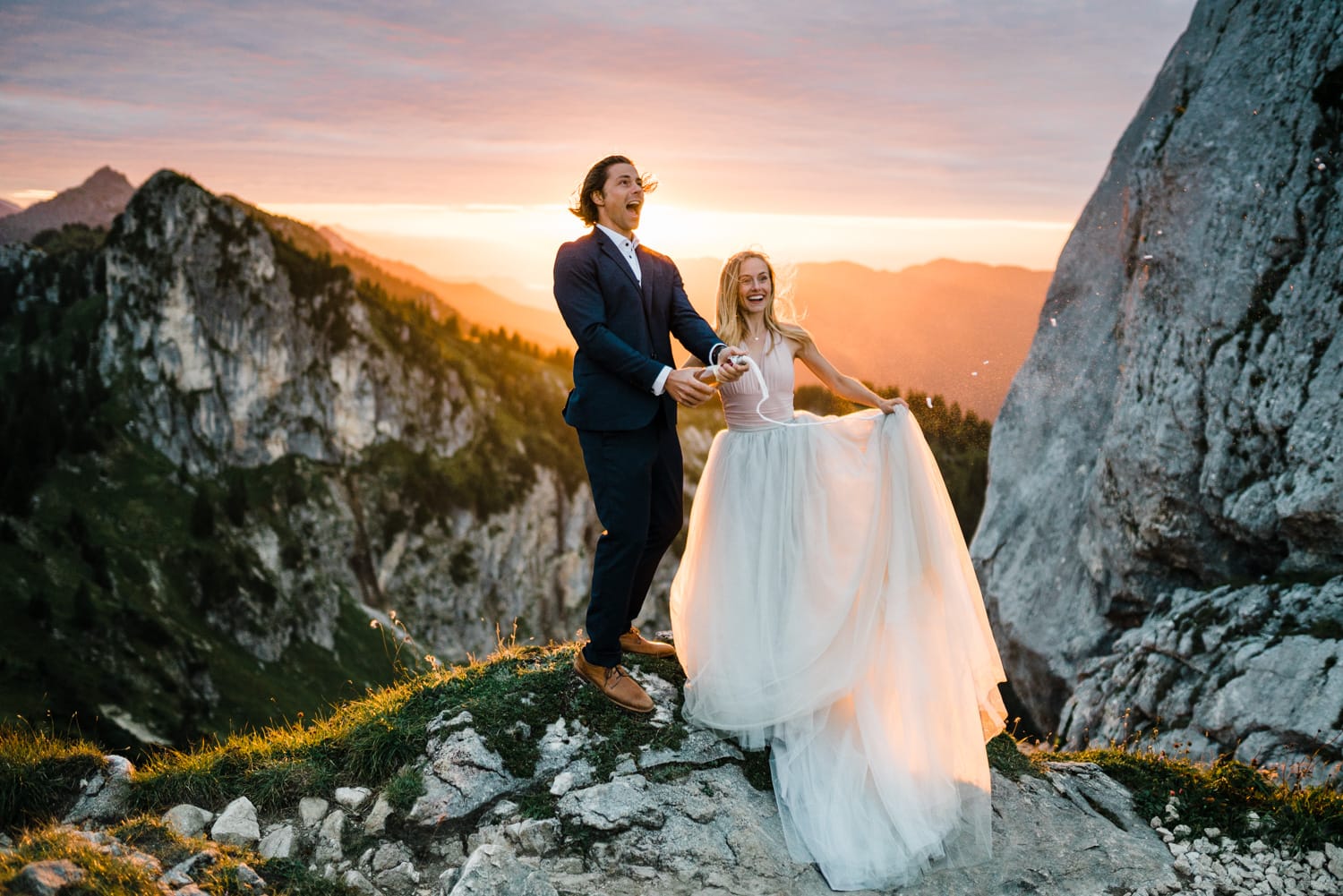 Take me to the guide

Not sure how to start planning your elopement? Download your free adventure elopement planning guide + checklist to get my insider tips!

Are you ready to have the experience of a lifetime?

Hi, I'm Christine, and there's nothing I love more than capturing rad couples’ adventures in the places and spaces that matter most. Love what you see on the site? Hit the contact button below to start making your adventure a reality! 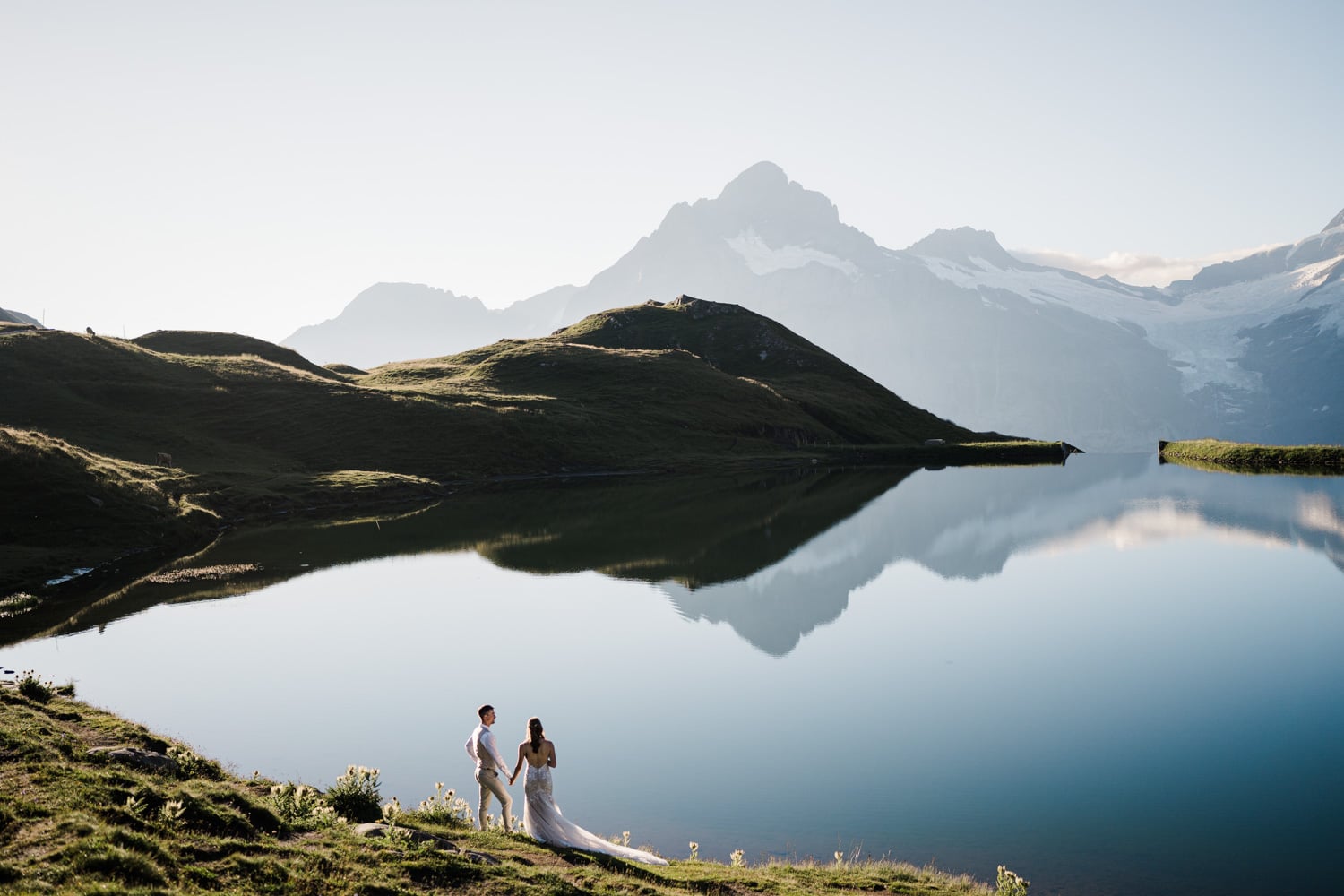 How to Plan a Hiking Elopement in the Alps: The Complete Guide 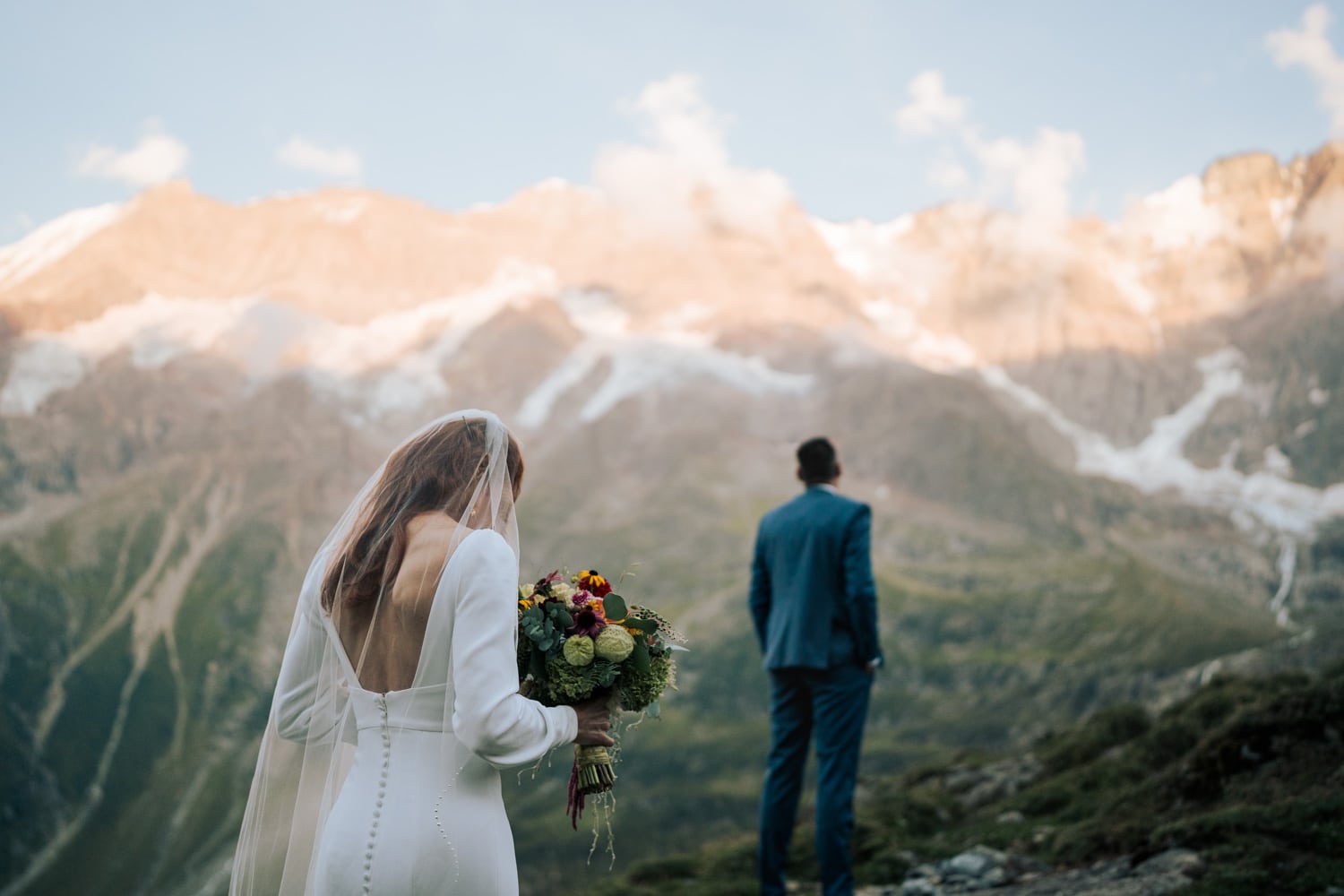